Home » Tormantil » Open Garden
[vc_row][vc_column][postgallery_grid id=”Grid_20170519_01″ data_source=”data-4″ null=”” slidesetid=”SS_G5_20170519_01″ content_type=”image” columns=”6″ height=”200px” align=”aligncenter” lightbox=”yes”][/vc_column][/vc_row][vc_row][vc_column][vc_column_text]In the UK we have had open gardens for donkeys years giving us the chance to see a variety of private gardens of all shapes, sizes and design, from the smart contemporary to cottage or wild spaces designed (some more likely ‘allowed’ to be) by all manner of gardeners. This movement, if it can be called that, is now manifest all over the world, and France is no exception. There is a small organisation and some 450 gardens now participating, including some friends of ours who live nearby. 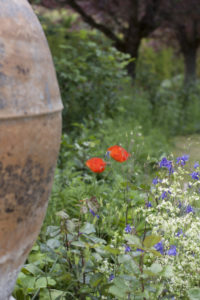 So we found ourselves helping out at their first ever open garden. Caroline had decided that serving refreshments in the way of tea and cakes would put a nice English touch to the weekend. We volunteered to bring some cakes and biscuits and lent equipment – cups, water heater and so on left over from the days of Liz’s tango club in London. We also manned the tea table which left Caroline free to chat to visitors and answer any questions about the garden. It is a beautiful setting, an old mill that had been converted some years ago and now added to and improved by Caroline and Ian. There is a lovely lake formed by the branch of the diverted Ruisseau de St Matré, this has a variety of fish, some very loud musical frogs and the occasional visiting heron. The garden is several hectares and includes fields with wild orchids and some new wooded areas where Caroline has planted young trees. The worry that no one would come vanished on the Saturday when the afternoon opening welcomed more than a dozen people. Caroline was greatly relieved and even more pleased when on Sunday more than double that number arrived, the last family leaving well after the official closing time. For us it was an opportunity to practice our language skills, although about a third of the visitors were English-speaking, and also do some socialising. The French visitors were enchanted by tea and cakes and the whole weekend was judged a most enjoyable success.

We are continuing to try and tame our wilderness and last week turned our attention once again to the rampant monster brambles and bamboo along our little river. Although they provide some good bird and butterfly habitat they have been left uncontrolled for so long that they are completely entangled. This gives us a problem when the bamboo die, they fall over into the brambles and create a sort of impenetrable mass that can get dragged into the water by the shear weight of the brambles and canes; they then create a dam which can quickly cause problems with our river banks and the water upstream. Liz started to cut down the jungle, a very slow and painful process as the brambles fight back and are vicious. the only way to deal with the debris is to allow it to fall into the stream and then push and pull it along to a suitable place to haul it out. Over several days we have made great inroads into the mass of brambles, it turning out to be a much larger job that we realised. Margie has become a rather good ‘log driver’ albeit that the ‘logs’ are brambles and canes and we now have the start of another bonfire.[/vc_column_text][/vc_column][/vc_row][vc_row][vc_column][postgallery_grid id=”Grid_20170519_02″ data_source=”data-4″ null=”” slidesetid=”SS_G5_20170519_02″ content_type=”image” columns=”6″ height=”200px” align=”aligncenter” lightbox=”yes”][/vc_column][/vc_row][vc_row][vc_column][vc_column_text]The potager is also progressing. We have splendid bean poles courtesy of the prolific bamboo – we don’t think we will need to buy another bamboo cane ever. We did have an unusually late frost which caught a few of our beans, but we have replaced the damaged ones or, in a few cases, left them as they looked like they might go. So now we have runner beans, haricots and peas starting to scramble up the canes. We also have strawberries looking very magnificent. The temperature recently has been in the mid thirties in the day-time, which makes watering something of a dilemma; we do half in the later evening and half in the morning. there is a threatened hose-pipe ban and some scare stories that temperatures will match 2003 this year. On that occasion there were many summer days in the forties and people died from dehydration whilst plants and agriculture suffered severe losses. We aren’t sure if a hose-pipe ban includes well water. Whatever the case we will have to water judiciously as the well must have a bottom and we don’t want to hit it.