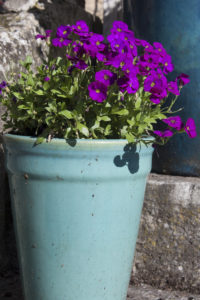 Lovely colours – aubretia and pot on the steps

This week we have put out some of the vegetables we hope to grow, Tomatoes are now on the terrace, Marmande to start with which will undoubtedly prefer it here to London; we also have some lettuce and chives. It was a bit wet this week so some of the time we were trapped indoors we used to plant some more seeds for our proposed potager. When the sun did come out it was lovely and showed off the aubretia in her new pot splendidly – this pot is one of the many transported from London and laboriously lugged onto the terrace by Norman and his crew in January – we love the colour combination. The aubretia sits on the steps of the house and behind her we have another lovely, slightly darker, pot with an electric magenta cinneraria. One of the highlights of the week was to see how much the insects liked them and a special treat was the hummingbird hawk moth. We saw these first in Italy years ago, they seem impossible and do look like miniature humming birds, they can even fly backwards in the same way. Liz thinks she saw one in London last year but although she is not entirely sure they have started to appear in southern Britain so you may see them. We now see them here daily and they are a joy. 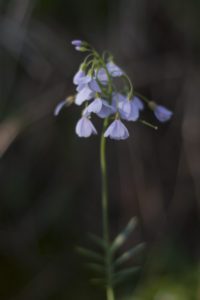 We continue to discover new wildlife here in our domain; this week we found cuckoo flowers (Cardamine pratensis) blooming on the river bank, These delicate flowers are supposedly special to fairies and should never be cut or brought inside – we wouldn’t dream of it they are so perfect where they are.

After nine weeks Caudi and Sunny both needed a foot spa so this week saw us meet Benjamin the farrier. Caudi now has splendid new shoes and Sunny has a beautiful manicure. It was interesting to note the difference in technique between the French and UK methods, mostly a difference in the sequence of trimming and tidying but also the way of trimming and also finishing the nails. Like almost all farriers these days Benjamin hot shoes using a gas fired forge; to our surprise the forge he uses is the same as our UK farrier and it is made in Gloucestershire.

Since we had so much wet weather this week Margie decided to make chutney. This is our first Tormantil preserve – ‘Spicy Fruit Chutney’ – and now sits proudly in our larder – although we have already given several jars to our French friends who don’t seem to have the same tradition of pickle and chutney making so we have to explain how it can be used. While Margie was slaving over a spicy cauldron Liz continued planning the garden and found a splendid application to help with vegetable garden planning. This is called GrowVeg it can be adjusted for location, has advice about planting and will send reminder emails about sowing, plantin

g out and suchlike based on the plan. Liz, who is a fusspot about these things, rates it highly and is using it a lot.

Just as we were about to publish we found something more to add. It was a beautiful sunny morning and a couple on bicycles stopped at the terrace and called up to us. They are from Paris and have a house here at Prassac – about six kilometres away. They asked if we had a tea-room as they had heard that one was going to open in Grezels. The extraodinary thing about this inquiry, aside from the speed of the grapevine, is that when we were buying the house we were advised by the agent and others that we should not mention our wish to have a tearoom; this seemed to be related to permissions and regulations and the received wisdom is, do the house first as a residential property and then create the tea-room. We were especially not to mention to the mayor as the mairie (the office of the mayor) is responsible for planning permissions. Unknown to us the previous owners, with whom we had discussed various possibilities, had chatted with the mayor and already mentioned the idea! In fact when we met the mayor she referred to it and seemed very pleased that someone is going to be adding to the life of the village. So far, because of the original advice, we have always said that it is only a possibility which is true as our approach to the renovations is to give ourselves as many options as possible so that we can pick and choose what we do from as many choices as possible. Anyway, it seems that not only to the grezelloises know about the idea – many have already asked – but also the idea seems to have spread to neighbouring towns. This is food for thought.[/vc_column_text][/vc_column][/vc_row][vc_row][vc_column][vc_separator color=”custom” accent_color=”#deead0″][/vc_column][/vc_row][vc_row][vc_column width=”1/2″][vc_column_text]Perhaps you would like to know…
.[/vc_column_text][vc_btn title=”How it all started” style=”custom” custom_background=”#deead0″ custom_text=”#666666″ link=”url:http%3A%2F%2Fwww.tormantil.com%2F2017%2F01%2F10%2Fhow-it-all-started%2F|title:read%20how%20it%20all%20began…|”][/vc_column][vc_column width=”1/2″][vc_widget_sidebar sidebar_id=”sidebar1″][/vc_column][/vc_row][vc_row][vc_column][vc_separator color=”custom” accent_color=”#deead0″][/vc_column][/vc_row]