Home » Tormantil » Cobwebs and Wine
[vc_row][vc_column][postgallery_grid id=”grid6_20170317″ data_source=”data-4″ null=”” slidesetid=”SS_G6_20170317″ content_type=”image” columns=”5″ height=”200px” align=”aligncenter” lightbox=”yes”][/vc_column][/vc_row][vc_row][vc_column][vc_column_text]We wanted to get the car serviced this week; it was an ‘interesting’ episode in our French education. We had bought Mimi V last November, the week we completed the purchase. Our plan was to buy a car then drive it back to the UK so that we could return in January with the two cats. Each car in France has a ‘carte grise’, the equivalent of the log book in the UK, this has to be updated with the new owner. We discovered that we must go to the ‘Communauté’, an administrative centre in Puy-L’Evêque, where we had to complete various forms. Therefore, in November on the day before we left, we went to the office to complete the forms, we then found that in order to pay we must go to the ‘tresorie’, this turned out to be a completely different building elsewhere in the town. We duly found the ‘tresorie’ but it was too late in the day and they were closed. This posed something of a problem since we were intending to leave for the UK early the following morning. We changed our plans and arrived bright and early the next day at the ‘tresorie’. There was a strike – just for that day! In the end we got a bankers cheque and posted the paperwork through the door before driving to catch the ferry. What we hadn’t reckoned on is the complexity of French bureaucracy – much worse than the UK. The first problem was that  ‘tresorie wouldn’t accept the cheque, only card or cash, so they returned it – but to our French address, so we only discovered this on returning to France in January. We went to correct things, paid in cash, obtained a receipt and returned home thinking all would be sorted out. The second problem only manifested itself when we wanted to get the car serviced and the garage asked for the ‘carte grise’. It was then that we realised we hadn’t seen it yet, we had thought it would arrive in the post. Wrong! In fact we should have returned to the first office, armed with the receipt, and they would issue the new version. Of course the woman at the ‘tresorie’ never mentioned this, why would she; we didn’t ask as it seemed logical that the document would arrive at home – especially as the previous cheque-refusal letter had done so. Eventually it was all sorted out but was something of an adventure. 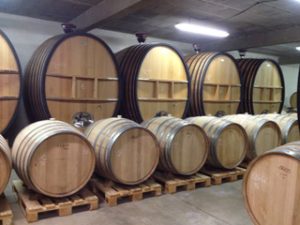 The barrels at Château du Cèdre, Lot – the huge oval barrel is called a ‘foudre’ (lightning in French)

One lovely thing that we did was to walk back from the garage where Mimi V was to be serviced, this is about six kilometres. It was early in the morning on one of the days that started misty before the sun burned it off. It was market day in Puy-L’Evêque, they start early in France and often end at lunch-time, so we bought a few provisions and then walked back to Grezels. The walk was all roads but they aren’t busy; we crossed the bridge at Puy-L’Evêque and saw our first house martin of the year – we doubted this but later in the week saw more so are fairly sure. The road to Grezels travels beside the river Lot with mossy cliffs and woods on the south side. The mist deadens the noise so it was very peaceful except for glorious early morning birdsong – blackbird, chaffinch, robin, wren, lots of tits and others we didn’t identify. Everything was sodden with dew. In the fields and trees the spiders had been busy spinning beautiful webs that hung with dewdrops, they looked like strings of pearls and diamonds. We took so long just staring and listening to the morning that it was about 11:00 when we got home and the mist was just starting to lift. Later that day and on several other this week the terrace thermometer was over 23 degrees – in the shade. We have both caught the sun.

This week was also Liz’s birthday so we decided to have a day of food, drink and pottering about the countryside. We drove west up to the ‘top’ where the limestone pavements are. The views are spectacular and the small villages, some really only hamlets, are charming. We found a local restaurant, Le Caillau, that we had heard good things about and has just re-opened after the winter break. It is ‘in the middle of nowhere’ with a lovely courtyard that we dined in. The food was excellent and very good value, we are sure to return. We had then arranged to visit Château du Cèdre. We had tried the wine last year when on holiday and liked it very much so this was something we had planned to do – especially as it is so close to home. Our research had shown it is organically produced and run by two brother of Flemish parentage. We met out host, Patricia, who was very knowledgeable and showed us the vines, the cellars and discussed the production before we tried the wines. The majority of the production is red, the so-called ‘black’ wine of Cahors, made with Malbec grapes, There were four to choose from, of which we liked the Château Cèdre the best.. Then the white, there are two they produce but the one we love is the Le Cèdre Blanc, which is made with viogner grapes. As it is organic and they work hard to produce high quality wines with a higher than normal number of staff tending the vines and producing the wine, it is not cheap; but goodness it is very good and their attention to detail and care really shows. Needless to say we bought some home with us! Finally, as it we hadn’t had enough, we went to dine at the Coté Lot. this restaurant is in the Bellvue, a small hotel in Puy-L’Evêque, where we stayed when we came over to exchange and complete the house purchase. Marie is front of house and has become a good friend, her husband Christophe is in the kitchen and very skilled – we particularly liked the smoked salmon, this Is salted and cured on the premises by Christophe, very delicate. The whole day was a lovely way to end the week.[/vc_column_text][/vc_column][/vc_row][vc_row][vc_column][vc_separator color=”custom” accent_color=”#deead0″][/vc_column][/vc_row][vc_row][vc_column width=”1/2″][vc_column_text]Perhaps you would like to know…
.[/vc_column_text][vc_btn title=”How it all started” style=”custom” custom_background=”#deead0″ custom_text=”#666666″ link=”url:http%3A%2F%2Fwww.tormantil.com%2F2017%2F01%2F10%2Fhow-it-all-started%2F|title:read%20how%20it%20all%20began…|”][/vc_column][vc_column width=”1/2″][vc_widget_sidebar sidebar_id=”sidebar1″][/vc_column][/vc_row][vc_row][vc_column][vc_separator color=”custom” accent_color=”#deead0″][/vc_column][/vc_row]