Home » Tormantil » Lovely, if sometimes wet
[vc_row][vc_column][postgallery_grid id=”grid_20170310″ data_source=”data-4″ null=”” slidesetid=”SG_G6_20170310″ content_type=”image” columns=”4″ height=”200px” align=”aligncenter” lightbox=”yes”][/vc_column][/vc_row][vc_row][vc_column][vc_column_text]We had torrential rain for a large part of the week so our charming little stream was once again transformed into a raging torrent and the larger river that it joins, the Lot, is very high. It meant we couldn’t do anything outside and it was so wet that it felt cold which is a disincentive to do anything inside. We can’t really complain most of the time it has been lovely and the last two days have been spectacularly sunny. On one of the days when it had bucketed down all morning it did finally let up and, having been housebound for days, took the opportunity to go on an exploring bike ride. Neither of us is good with bikes on hills or with adverse weather so we decided on a flat route and hoped the weather would hold. Margie was the pathfinder and took us down a pretty, fairly flat and seldom used road beside a stream. Gradually the road began to climb ‘don’t worry’ Margie said confidently, ‘it will flatten out in a minute’. The road, ignorant of our requirement went up, and up, and up; we got off and pushed, puffing and panting. When we got to the top we came out beside a lovely old house. The road became a track to a second property obviously only used in summer; it then petered out. As we didn’t want to turn back we went on, squeezing the bikes though a pair of old gates, up again through some trees to a field that really was the top, later we discovered it was 225m not huge but enough given Grezels is at about 85m. The field was surrounded by trees and, despite being the top of a hill it was very water-logged – it must be on a clay cap. The question was could we find a path or should we turn back? We walked around the field – pushing the bikes again – and did come to a path, not much better than a deer-track, but Margie was ‘certain it would lead up to a larger one’, we bravely pushed our bikes through the woods – barmy English girls! We did find a track, the problem was it was the other side of a barbed wire fence. We heaved the bikes over – these are not mountain bikes just ‘dutch’ cycles – finally remounted and set off towards home. The track was a stony, rutted. muddy  and full of puddles, it also descended at quite a rate. There were lovely views across the Lot valley but not much chance to admire them as it took all our concentration to stay upright as we bumped and skidded our way downhill, splashing through the puddles – we felt like members of the Famous Five (Enid Blyton children’s books for those that don’t know). Finally we arrived at the bottom in the car-park at Grezels beside the salle de fête, It had only been just over the hour and 6.5 Km but it felt more like 20. We had hot baths and slept very well. 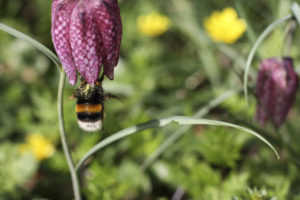 Fritillary and bumble bee at Grezels

Spring is galloping on apace, there are cowslips everywhere  and we saw several over-wintered butterflies – our first  Brimstone which is great as it means we have buckthorn and alder buckthorn nearby. We also spotted a Comma and lots of Red Admirals along with many bees including the impressive Xylocope or Violet Carpenter Bee which at 25 – 30 mm is quite surprising when first seen, they are stunning.

The Japanese cherry is in full flower an beautiful. This poor little tree had been happily growing in a pot in London and every spring made a beautiful show of white-pink flowers followed later by small bitter cherries. Our friend Omar helped to empty all the pots that we were going to transport because they were very heavy and those without plants could travel empty. Liz arrived home and Omar showed her his handiwork ‘excellent, but why is this one empty?’, poor Omar, he had thought the tree was unwanted or dead and had thrown it out along with the soil into the waste waiting for collection. They quickly rushed out to inspect the huge Hippo-bag, fortunately one brave little twig was stuck out of the mound of earth so she was retrieved and replanted. We crossed our fingers that she would survive. Omar, who was mortified at his mistake, will be hugely relieved that she is thriving here. 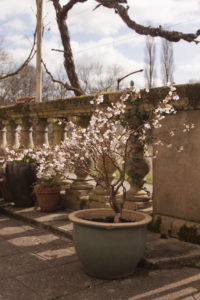 Japanese Cherry – survived being thrown out in London and rescued

Of course the days that were good had to involve strimming, Margie seems to be an addict and Liz still can’t get a turn. We have been dong the banks of the south field and are making good but slow progress and are now about halfway round. Margie found an old branch from the walnut tree under the brambles and on it were the most beautiful fungi. In French they are called Pezize Orangée but the English is better, they are called Scarlet Elf Cups which, despite the warning colour, are edible. Our little mushroom book, left by the previous occupiers say that they are good eaten as a desert, raw with kirsch!  Anything with kirsch would be good but we won’t chance it especially as some authorities suggest they are inedible. Incidentally the little book, which is in French, is an old Readers Digest edition 1969.

One Response to Lovely, if sometimes wet